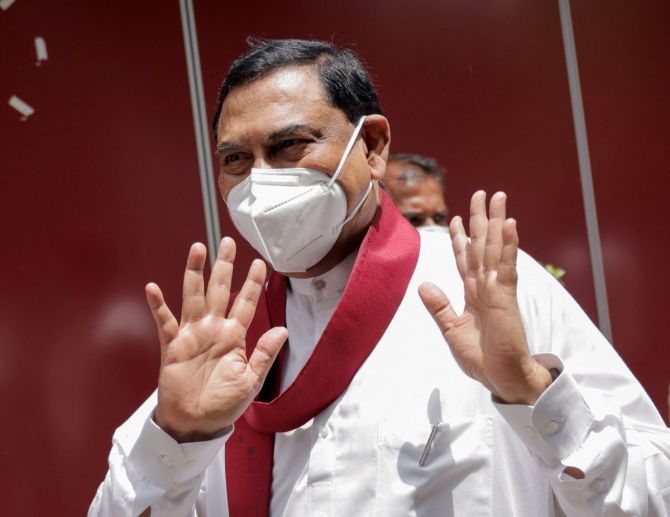 This development comes a day after Parliament Speaker Mahinda Yapa Abeywardena clarified that Gotabaya Rajapaksa is still in the country, soon after reports emerged that the President has left the island nation.

Sri Lankan President Rajapaksa, who announced his resignation on Saturday, was earlier said to have fled and was in a third country.

“President of Sri Lanka Gotabaya Rajapaksa is still in the country, I made a mistake in the (BBC) interview,” Speaker Abeywardena said in a telephone call.

When asked further about the whereabouts of Sri Lankan Prime Minister Ranil Wickremesinghe and the Sri Lankan President, the speaker said that both of them are still in the country.

The development comes after thousands of people stormed into the President’s House in Fort on Saturday.

The dramatic visuals came from PM’s official residence where they were seen playing carrom board, sleeping on the sofa, enjoying in park premises and preparing food for dinner.

Prime Minister Ranil Wickremesinghe also announced to step down from his posts amid the ongoing protests.

However, the protesters who have occupied the residences of the President and Prime Minister have cleared that they will continue to occupy their houses until they resign from their posts.

The worsening economic situation in the country has led to increasing tensions and over the last few weeks, there were reports of several confrontations between individuals and members of the police force and the armed forces at fuel stations where thousands of desperate members of the public have queued for hours and sometimes days.

Sri Lanka is suffering its worst economic crisis since gaining independence in 1948, which comes on the heels of successive waves of COVID-19, threatening to undo years of development progress.

The oil supply shortage has forced schools and government offices to close until further notice. Reduced domestic agricultural production, a lack of foreign exchange reserves, and local currency depreciation, have fuelled the shortages.