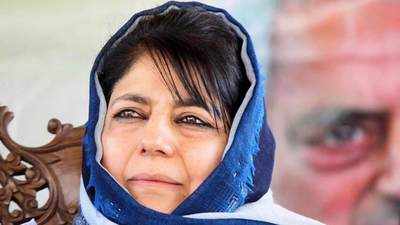 Srinagar (Jammu and Kashmir): Former Jammu and Kashmir Chief Minister and PDP chief Mehbooba Mufti has appealed to the youth in the union territory to shun violence and refrain from “picking up guns”.

“I request youngsters and parents to stop youth from picking guns. They (forces) get money by killing you. I request them to stop picking guns,” said Mehbooba Mufti while addressing reporters here.

The PDP chief also urged the Maulavis to declare Kashmiri Pandits as a “resource” and condemned the attacks on them.

“I request Maulvis to announce that pandits are our resource, so many attacks on them shouldn’t take place,” said Mehbooba Mufti.

According to the PDP leader, the Centre was using all methods to disempower the people of the Union Territory.

“Our jobs are put on sale. Our land is prioritised and given to security forces first. All small-big contracts are being given to outsiders including Jammu AIIMS, Kashmir AIIMS. All methods to disempower J&K people are being used,” said Mufti.

Speaking on a recent encounter in Kashmir, Mufti said, “A blast happened in Shopian in a Sumo. They arrested the driver Showkat Ahmad Sheikh and took him into custody. After 10 days they say he was killed in an encounter in Kupwara. But how did he reach there from custody?,” added Mufti.

On June 20, seven terrorists, including an arrested terror suspect, were killed during three separate encounters with the security forces.

According to police, four terrorists, including Showkat Ahmad Sheikh who was arrested on terror charges, were killed during an encounter in Lolab area of Kupwara district.

Earlier this month, police had said that Showkat Ahmad Sheikh, a resident of Sedow village in Shopian district, was arrested along with another accused for their involvement in an IED blast on June 2.