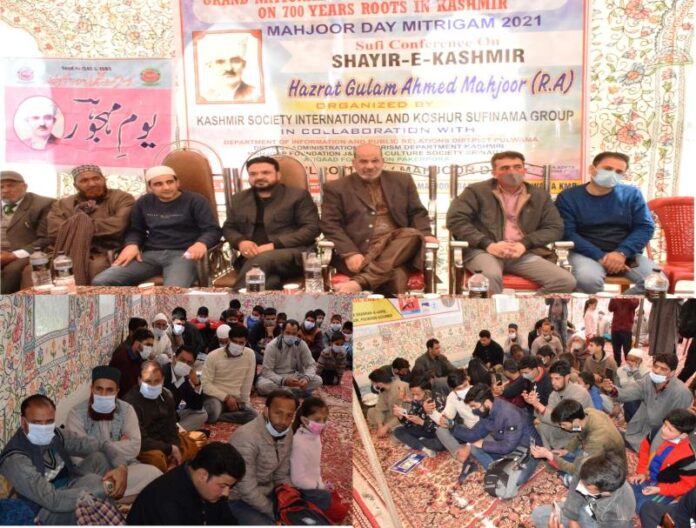 Baramulla (Jammu and Kashmir): In a bid to revive Sufism in Kashmir, the Voice for Peace and Justice organized a one-day conference on Sufism at Babareshi Tangmarg in Baramulla on Wednesday.

The aim of the conference was to make people aware about Sufism, the backbone of Islam which teaches people to spread peace, love and brotherhood. During the conference, a number of Sufiyana music segments were performed by the Kashmiri singers of the valley which attracted a good audience including writers, poets, authors and other intellectuals.
The conference was attended by hundreds of people who came all along the way from the whole Kashmir valley to part in the conference.

Sheikh Minhaz, general secretary of Voice for Peace and Justice, in his address, said Sufism is the only way forward for peace in Kashmir. The Sufi Saints travelled miles to promote peace and brotherhood in Kashmir, while some elements are leaving no stone turned to spread extremism over Sufism.

He emphasised the role of Sufis in Kashmir and said people should follow Sufism so that ever-lasting peace can be imposed in Kashmir.

While as Farooq Ganderbali, a renowned social activist and president of Voice for Peace and Justice, in his speech said, “Radical forces tried hard to suppress the voice of the majority of the people of Kashmir, targeted shrines and literature to ruin the fabrics of Sufism in Kashmir, but in the present scenario the Sufism is an only option to live peacefully and in the eco-friendly atmosphere with the people irrespective of religion, creed and caste.”

Dr Shajid Hussain, while comparing the current situation said Sufism paves strength to the communal harmony in Kashmir and in the current scenario Sufism can be the only option to eradicate the sense of radicalisation in the valley.

He further praised the Sufi saints for their sacrifices and efforts for the promotion of peace, brotherhood and love in the valley.

Iman Jamia of Jamia Masjid baba Payamudin Reshi (RA) in his speech said that Sufism in Kashmir is just limited to literature. “We must work to implement the teachings of saints on the ground and involve our younger generations for the revival of Sufism in Kashmir,” he said.