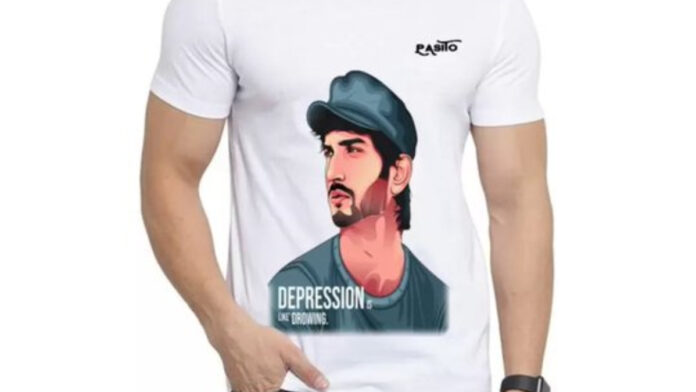 Mumbai (Maharashtra): Fans of Sushant Singh Rajput are outraged and have shared screenshots of a T-shirt allegedly sold on Flipkart with a photo of the late actor and the message reading ‘Depression is like drowning.’

“Boycott Flipkart” trended on Twitter on Tuesday evening after one of his fans discovered a T-shirt which included the artwork of late actor Sushant Singh Rajput referring to his “depression” on the website.

As soon as it was shared, the picture of the t-shirt went viral and fans of Sushant complained on Twitter over the T-caption. Some of them demanded an apology from Flipkart and the withdrawal of the offending T-shirt from their website. The T-shirt is no longer available on the website.

As many people responded with disbelief, fans of the late actor tweeted screenshots of Flipkart’s T-shirt with Sushant’s picture. The “insensitive” product stunned some people, while others dubbed it a “smear campaign” against the late actor.

A user tweeted, “I will serve notice to @Flipkart tonight (for approving a material which is defaming a deceased) as a common and responsible citizen.”

Another wrote, “Country has not yet come out of the shock of Sushant’s tragic death. We will keep raising our voice for justice.. Flipkart should be ashamed of this heinous act and should apologize that such incident will not be repeated again”.

“Smear Campaign Against SSR”, one of the users tweeted.

The actor passed away in 2020 at his Bandra residence which created a lot of controversies. The CBI was brought to investigate the actor’s death from various angles.
Post demise, his Patna residence was turned into his memorial with the late actor’s telescope, books, guitar and other personal things.

Sushant Singh Rajput made his Bollywood debut with ‘Kai Po Che’ and was known for his kind gesture, and always treated his fans with utmost pleasure, he gathered a lot of popularity after his biggest success ‘M.S Dhoni – The Untold Story’. His last big-screen appearance was ‘Chhichhore’ which was released in 2019 and was a blockbuster hit.

The actor was last seen in director Mukesh Chhabra’s ‘Dil Bechara’ opposite Sanjana Sanghi which was the official remake of the novel ‘The fault in our stars’, the film went for an OTT release.