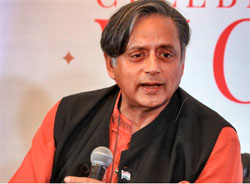 Thiruvananthapuram (Kerala): Congress leader Shashi Tharoor on Thursday clarified that everything he tweets is his ‘personal opinion’.

This came a day after Tharoor’s comments on the backlash against Trinamool MP Mahua Moitra for her comment on Goddess Kali for which the Congress MP had come under fire by his own party.

Tharoor took to Twitter and said he does not have any other kind of opinion except personal. Quoting Alexander Hamilton, Tharoor wrote, “Those who stand for nothing, fall for anything.”

Congress MP Shashi Tharoor on Wednesday came out in support of Trinamool Congress MP Mahua Moitra over her comments on Goddess Kali stating “our forms of worship vary widely across the country.”

He also urged people to “lighten up and leave religion to individuals to practice privately.”
In a series of tweets today, Tharoor wrote, “I am no stranger to malicious manufactured controversy, but am still taken aback by the attack on @MahuaMoitra for saying what every Hindu knows, that our forms of worship vary widely across the country. What devotees offer as bhog says more about them than about the goddess.”

“We have reached a stage where no one can say anything publicly about any aspect of religion without someone claiming to be offended. It’s obvious that @MahuaMoitra wasn’t trying to offend anyone. I urge every1 to lighten up&leave religion to individuals to practice privately,” he tweeted.

Following this, Shashi Tharoor too came under fire. Congress spokesperson Ragini Nayak said, “What Shashi Tharoor said was not the stand of the party. The Congress party’s clear stand is that like Gandhiji said; religion is a matter of personal faith for a person. But we should also be careful that we don’t do anything that hurts the sentiments of a person from another religion. It is the duty of everyone to ensure that.”

BJP leader Amit Malviya tweeted, “Mamata Banerjee’s politics, steeped in brazen minority appeasement, is the reason why her MP made that outright insulting comment on Maa Kaali. TMC must suspend her, ask WB police to file FIR. Sonia Gandhi must also clarify Congress’s stand on it after Shashi Tharoor’s support…”

However, the Trinamool Congress (TMC) has condemned party MP Mahua Moitra’s remarks on Goddess Kali where she called the Hindu deity a “meat-eating, alcohol-accepting goddess”.#IndiaTodayConclaveEast2022 and her views expressed on Goddess Kali have been made in her personal capacity and are NOT ENDORSED BY THE PARTY in ANY MANNER OR FORM. All India Trinamool Congress strongly condemns such comments,” the tweet put out by the official handle of TMC read.

Mahua Moitra has been booked for allegedly hurting religious sentiments after her comment on Goddess Kali stirred a controversy.