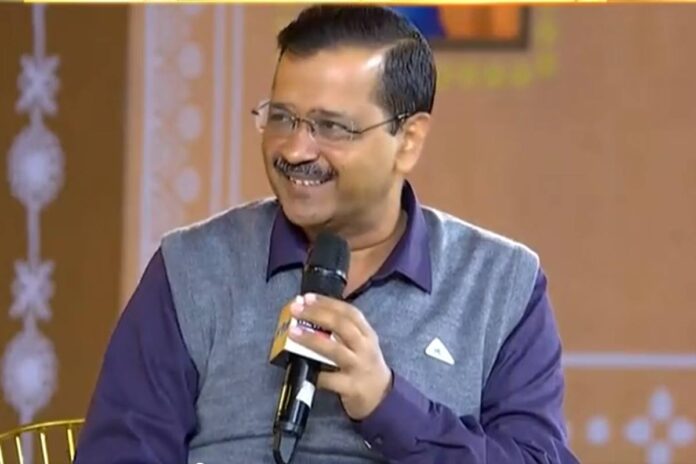 Ahmedabad (Gujarat): With just a few months left for the Gujarat Assembly election, Aam Aadmi Party (AAP) national convenor Arvind Kejriwal on Sunday urged the Gujrati people to vote for AAP saying ‘those who are not satisfied with BJP should vote for us’.

“We are not here to engage in dirty politics or corruption. We are here to help people. We are doing good work in Delhi and Punjab. Don’t waste your vote on Congress. Those who are not satisfied with BJP should vote for us,” said Arvind Kejriwal addressing a gathering in Ahmedabad.
A

s many as 6,988 AAP office-bearers took oath on Sunday.
“The common man in Gujarat wants a change. They are joining hands with the AAP… There are no Congress office-bearers or volunteers in Gujarat, but lakhs from AAP. Within a month, we’d be bigger than even BJP,” said Kejriwal.

Expressing hope and confidence over the AAP’s victory in the 2022 Gujarat elections, the Delhi CM said, “AAP is expanding on a huge scale in Gujarat. People are tired of the 27 years of BJP. BJP thinks Congress can’t replace them so they have developed ego. People are looking with hope towards AAP this time.”

The Delhi CM also condemned the killings in Maharashtra’s Amravati and in Rajasthan’s Udaipur.

On June 28, a tailor Kanhaiyalal Kumar was beheaded by two men inside his shop in Udaipur in the broad daylight, while a chemist shop owner Umesh Kolhe was killed by several men in Amravati on June 21.

On the incident, the Delhi Chief Minister said, “Whatever is happening is wrong, the country can’t move forward like this. There should be peace and unity. I condemn this and hope that the accused get the strictest punishments.”

Why No Sikh Judges In Latest List Of Punjab & Haryana HC?: Sukhbir Badal