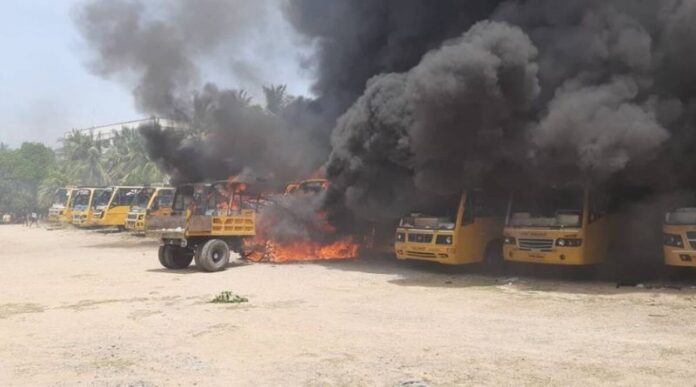 Chennai (Tamil Nadu): A notice has been issued to all private nursery, matriculation and CBSE schools that remained closed on Monday following violent protests over the death of a schoolgirl at a private residential school in Kallakurichi district in north Tamil Nadu.

Meanwhile, School Secretary, Principal, correspondent and 2 teachers were sent to 15 day-remand in connection with the death of a 17-year-old school girl in Kallakurichi, Tamil Nadu

The Directorates of Matriculation on Tuesday has sent a notices to 987 private schools, seeking an explanation from them over their against the government’s instructions.

Condemning the violence on Kallakurichi school, 987 schools in Tamil Nadu remained closed on Monday. Earlier Government warned that there will be stern action if they decided to close operations.

Directorates of Matriculation School stated that post the explanation from the school we will take further steps.

The Supreme Court has refused to stay the second autopsy scheduled later today.

The student’s father has moved the top court with a plea to include a doctor of their choice in the panel that conducts the second round of post-mortem examination.

On Monday, the Madras High Court ordered a second autopsy of the girl who killed herself after she was allegedly harassed by two teachers at her school in Kallakurichi, Salem district. The court ordered that the father of the girl be allowed to remain during the procedure.

The first post-mortem report mentioned “abrasions”, according to the police.

Relatives of the girl and people belonging to her village in the Cuddalore district have been protesting outside the school.

On Sunday, protesters clashed with the police and set several buses on fire.

The incident sparked violent protests in the district, prompting the Salem police to deploy heavy security around the school and other areas.

Section 144 had to be imposed in several areas. The High Court also ordered the Police to find out who instigated the violence.

On July 13, the girl allegedly jumped off the third floor of the hostel building.

Police said she left a note that says she was struggling in several subjects and that she was humiliated by her teachers.

Her family alleges that two teachers had mentally harassed and humiliated her.

Chief minister MK Stalin, addressed the media on the incident and called the violence ‘worrying’ and urged the protesters to maintain peace.

Promising justice for the Class 12th student, Stalin said, “I have asked the DGP and the home secretary to travel to Kallakurichi. Accused will be punished when the police probe over the schoolgirl’s death ends.”