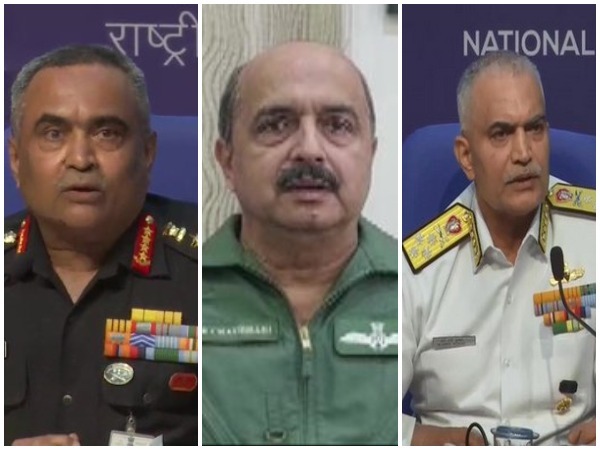 New Delhi [India]: Amidst protests against the Agnipath scheme in various parts of the country, the top brass of the three services will be present at a military meeting scheduled to be held today.

Defence Minister Rajnath Singh chaired a meeting today on the Agnipath scheme at his residence.

The meeting, presently underway at the Union Minister’s residence, has the Tri-services chiefs in attendance.

It has been learnt that the meeting focuses on ensuring a quick rollout of the ‘Agnipath’ scheme.

This is the second such meeting called by Rajnath Singh in two days.

In a significant move, the Ministry of Home Affairs on Saturday announced an important decision to reserve 10 per cent vacancies in Central Armed Police Forces and Assam Rifles for Agniveers.

Earlier speaking of the employment opportunities for Agniveers, Defence Minister Rajnath Singh said that upon completion of four years of Agniveers many central ministers and state governments including Public Sector Undertakings (PSUs) and corporations will give them job priorities.

“In coming days you will get the announcement by various governments and ministries regarding the priority in job opportunities to Agniveers,” the Defence Minister added.
Earlier, in a welcome move, the government had announced a change in recruiting ‘Agniveers’, increasing the maximum entry age from 21 years to 23 years by giving two years of relaxation as a one-time waiver.

Granting a one-time waiver, the Union government declared that the Agniveer upper age limit for recruitments via Agnipath Scheme has been extended to 23 years from 21 years.

Issuing an official statement on Agnipath Scheme, the Ministry of Defence mentioned that the one-time waiver in the upper age limit has been granted as recruitment during the two years had not been possible.