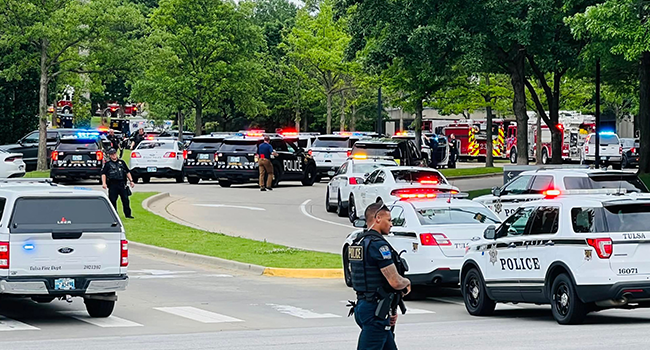 Illinois [US]: As many as six people were killed and 24 were hospitalized in a shooting at the July 4th parade route in north suburban Highland Park in Illinois.

Independence Day parade in Highland Park, Illinois, a northern suburb of Chicago, erupted in panic when shots were fired about 10 minutes after the parade kicked off, according to media reports.

At least 25 shots were fired at an Illinois Fourth of July parade; a reporter saw five people bloodied.

“As parade-goers fled the parade route in Highland Park, they left behind chairs, baby strollers and blankets,” tweeted Shannon Watts, Founder of “Moms Demand Action”.
The shooter was reported to still be active just after 11 am (local time), US media reported.

Sources said the person could be shooting from atop a high building. The parade route was near Central Avenue and Second Street.

The parade was stopped about 10 minutes after it kicked off at 10 am when shots were fired, striking an unknown number of parade-goers and sending hundreds of people running for safety.

Police were telling people, “Everybody disperse, please. It is not safe to be here.”

As they fled the parade route, parade-goers left behind chairs, baby strollers and blankets as they sought cover, not knowing just what happened.

Police were patrolling the area with rifles. The parade had a heavy presence of police and fire vehicles.

The city of Highland Park provided very little information on the incident in a Facebook post just before 10:45 am, only saying the city’s Fourth Fest had been cancelled.