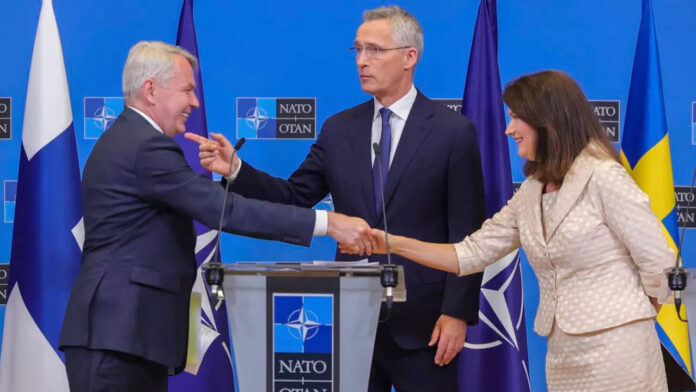 Washington DC [US]: Amid threats from Russian President Vladimir Putin that Sweden and Finland would face unspecified retaliation should they join NATO, US Senate on Wednesday (local time) approved the applications of both countries to join the alliance.

The Senate voted overwhelmingly to approve a treaty that would expand NATO to include Finland and Sweden. However, the accession will only be at the collective will of all 30 member countries since all decisions are taken by consensus. Therefore, all 30 current members of the alliance must ratify the accession of the two countries. Twenty-two countries have already done so, reported New York Times.

Senators voted 95-1. Only Senator Josh Hawley, Republican of Missouri, voted no. Senator Rand Paul, Republican of Kentucky, voted present. The bipartisan support was evident as the tally, was far surpassing the two-thirds support which was necessary to approve the treaty.

Foreign Minister of Finland Pekka Haavisto and Foreign Minister of Sweden Ann Linde attended the signing ceremony.”With 32 nations around the table, we will be even stronger and our people will be even safer, as we face the biggest security crisis in decades,” declared NATO Secretary-General Jens Stoltenberg in a press conference after the signing ceremony.

NATO’s 30 members formally invited Finland and Sweden to join their alliance at the NATO Summit in Madrid, Spain, just seven weeks after both countries handed their applications in response to the Russia-Ukraine conflict.In the first instance, the accession process was blocked by Turkey, a NATO member that raised concerns over the fight against terrorism, however, after signing a memorandum of understanding (MOU) with Finland and Sweden, Turkey lifted its veto ahead of the NATO Madrid summit.

The next step was for the parliaments of all 30 NATO members to ratify Sweden and Finland’s accession to NATO, according to their own national procedures. US has approved Finland and Sweden’s accession to NATO and now time will tell if same ground is held by all the other countries.