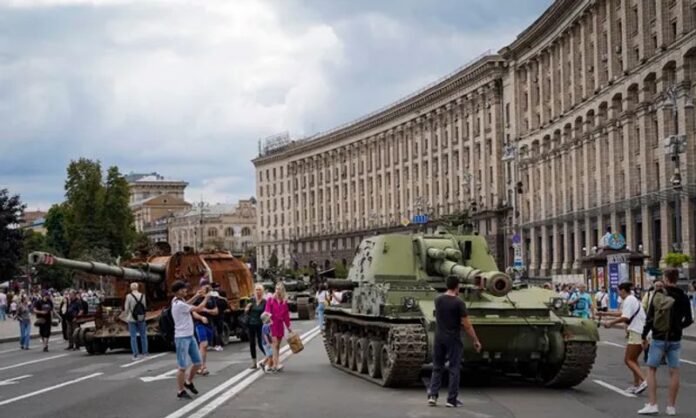 Washington [US]: The United States will announce an additional security aid of USD 3 billion for Kyiv on Ukraine’s independence day.

The funds will reportedly be used to acquire drones, weapons and other military equipment but may not reach the battlefield for a period of a year or two years, Sputnik reported citing US officials. The military assistance package will be announced on Wednesday and it seeks to strengthen Ukraine’s medium- and long-term defence readiness amid Russia’s special military operation.

The package will also include Western air defence capabilities and a large quantity of ammunition, reported Sputnik.

The Ukraine Security Assistance Initiative (USAI) of the US government has some USD 4.5 remaining that may be used to make up a substantial amount in the USD 3 billion package.
On August 19, the US Defence Department announced that it would provide a new USD 775 million in additional military assistance to Ukraine, including HIMARS missiles, artillery, and mine-clearing systems.

The package will be sent through the Presidential Drawdown Authority (PDA), as per CNN.
In this assistance, the US will give 15 Scan Eagle drones to assist with targeting reconnaissance for Ukraine’s artillery, 40 mine-resistant ambush-protected vehicles (MRAPs) that will allow the Ukrainians to move through mined areas, High-Speed Anti-Radiation Missiles (HARMs) for Ukraine to target Russian radars and 1,500 tube-launched optically-tracked wire-guided missiles (TOW missiles) to target Russian armor.

With this latest package, the Biden administration has now committed over USD 10 billion in security assistance to Ukraine. This is the 19th PDA package the department has provided Ukraine with since August 2021.

Earlier, on August 8, the US announced USD 1 billion in security assistance for Ukraine to meet its critical security and defence needs amid the ongoing war with Russia.

This latest authorization is the Biden administration’s eighteenth drawdown of equipment from DoD inventories for Ukraine since August 2021. The new package includes ammunition for High Mobility Artillery Rocket Systems (HIMARS), as well as 75,000 rounds of 155 mm artillery ammunition and 50 armoured medical treatment vehicles.

Since 1993, the US has invested over USD 4.2 billion for the safe clearance of landmines and explosive weapons of war (ERW) as well as the securing and safe disposal of excess small arms and light weapons (SA/LW) and munitions in more than 100 countries and territories.
In total, the United States has now committed approximately USD 9.8 billion in security assistance to Ukraine since the beginning of the Biden Administration. Since 2014, the United States has committed more than USD 11.8 billion in security assistance to Ukraine.

Notably, Russia launched a “special military operation” in Ukraine on February 24, which the West has termed an unprovoked war. As a result of this, the Western countries have also imposed several crippling sanctions on Moscow.