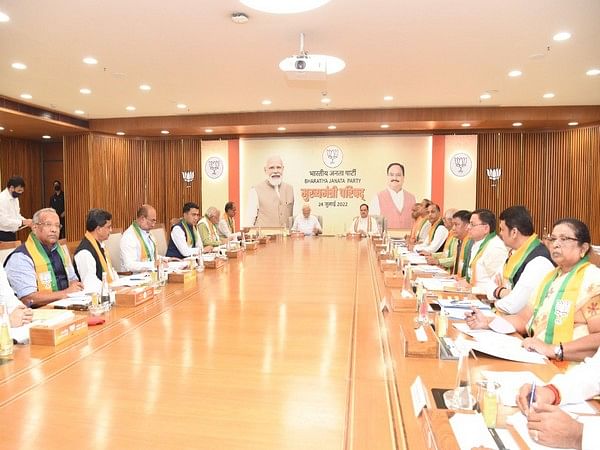 Dehradun (Uttarakhand): Uttarakhand Chief Minister Pushkar Singh Dhami on Sunday expressed his gratitude to Prime Minister Narendra Modi for his guidance in the development of Uttarakhand and said that the state government is committed to developing Uttarakhand as per the PM’s dreams and it plans to double the state GDP in the next 5 years.

Dhami participated in the Chief Ministers Council meeting held on Sunday under the chairmanship of PM Modi in New Delhi. After the meeting, Dhami said, “The verdict of Uttarakhand 2025 and 2030 is being prepared to realize the dream of the decade of the 21st century.” A press note released by Uttarakhand Chief Minister’s Office (CMO) informed about a vision plan according to which the state is eyeing to double the state Gross Domestic Product (GDP) in the next 5 years, targetting a growth rate of 15 per cent per year. “Vision Plan, the target of doubling the state’s gross domestic product in the upcoming 5 years through a 15 per cent growth rate per year. Chief Minister Pushkar Singh Dhami detailed the development work and further development of the state in the conference, in order to realize the Vision Plan of Uttarakhand, in this financial year, capital expenditure increased by 13 per cent to 17 per cent relative to the last year’s budget. As a result of this increase, the state has achieved the target of 4 per cent of the state’s gross domestic product in the state of the state”.

“In this series, the basic structures of approximately Rs 25,000 crore will be developed through external assistance in the coming 5 years to give power to the state’s economic pace. State Speed Power Master Plan is being prepared along the lines of the “PM Speed Power Scheme” to ensure better harmony between the departments and the exact planning of capital projects. This ambitious scheme has been set to complete this ambitious scheme in the next 6 months.”

The ‘Vision plan’ plans to achieve the ambitious economic goals of the Vision Plan will be achieved through Thrust Sectors such as (Tourism, Transportation, Service Sector, Agriculture and Garden, and Pharma). Meanwhile, Rishikesh-Karnprayag and Tankpur-Bageshwar rail projects are being worked on rapidly. In the state, the permissions of different departments are being given at a fast pace through the single window portal for an investment-friendly environment.

With the immense potential of Uttarakhand’s tourism, the state is being strengthened through the Home Stays by strengthening the rope and tunnel parking in collaboration with the Government of India. The CMO said that this time about 28 lakh people participated in the Chardham Yatra. The Chief Minister thanked Prime Minister for the PM’s guidance and the direction of the Prime Minister for the rebuilding of Kedarnath and Badrinath Dham.

“Despite its limited resources, focusing on export in the past year has exported approximately Rs 17,000 crore, which has a special contribution to Pharma Sector. During Russia-Ukraine War, Maduva was exported to Europe, Jhingora, such as traditional food grains of Uttarakhand. District Level Export Plan has been prepared by selecting the product for successful implementation of a product plan to promote export”.

“On May 27 May 2022 May 27, 2022, the committee has been formed on this subject, Committee has so far had two meetings. The Chief Minister said that the annual work of each department has been prepared for the successful operations and projects of various schemes in the state and for regular monitoring of each department, which is being reviewed at a high level”.

“Use of Department of Biotechnology (DBT) is being used in 215 beneficial schemes to ensure transparent fund flow by Uttarakhand. Uttarakhand is in the first three states of the country, where the bank account base of all the beneficiaries of MNREGA is a seed. GeM portal has been made necessary to make government purchases transparent in the state. In such a way, 4,007 seats were made available in addition to 35,951 regular seats in the state’s marginal districts schematically. A battalion was established by upgrading the NCC company in marginal districts such as Uttarkashi and Chamoli,” the CMO explained.