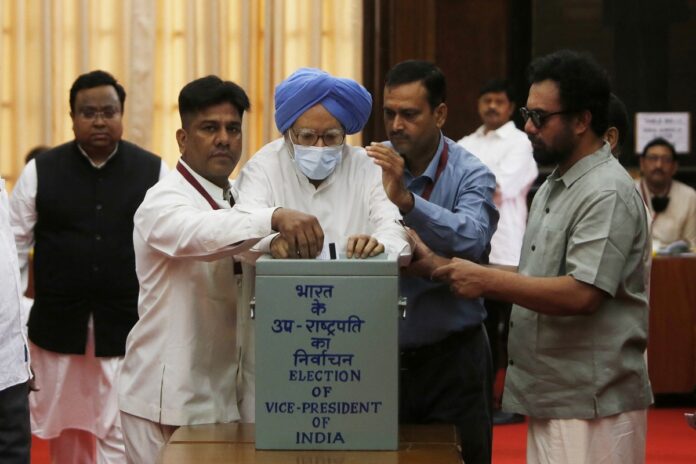 New Delhi [India]: Former Prime Minister and Congress MP Dr Manmohan Singh cast his vote in the Parliament as voting to elect the country’s next vice-president began on Saturday.

Voting for the Vice Presidential election in which the National Democratic Alliance (NDA) candidate is pitted against the Opposition nominee Margaret Alva began at 10 am and will continue till 5 pm.

All MPs of the Lok Sabha and the Rajya Sabha, including nominated members, are entitled to vote in the vice presidential election.

Votes will be counted today itself and the next Vice-President of the country will take the oath of office on August 11, a day after the term of the incumbent Vice President M Venkaiah Naidu ends.

The Trinamool Congress has said that is abstaining from the vote.

On July 18, Dhankhar filed his nomination papers before Returning Officer and Secretary General, Lok Sabha in the Parliament House.

The vice president of India, which is the second-highest constitutional post in the country, is elected through an electoral college consisting of members of the Rajya Sabha and the Lok Sabha.

Dhankhar, who is a lawyer by profession, joined politics in 1989. He became the governor of West Bengal in July 2019 and has made headlines since then over his tumultuous relations with the Mamata Banerjee government.

He tendered his resignation as the Governor of West Bengal.

Meanwhile, Alva filed her nomination for the vice presidential election on July 19.

Opposition parties on July 17 decided to field the former Rajasthan Governor as their joint candidate for the vice presidential election.

The decision to field Alva was taken at a meeting of Opposition leaders of 17 parties at the residence of NCP supremo Sharad Pawar.

In 2017, the NDA nominated Venkaiah Naidu as its candidate for the vice-presidential election and his term ends on August 10, 2022.