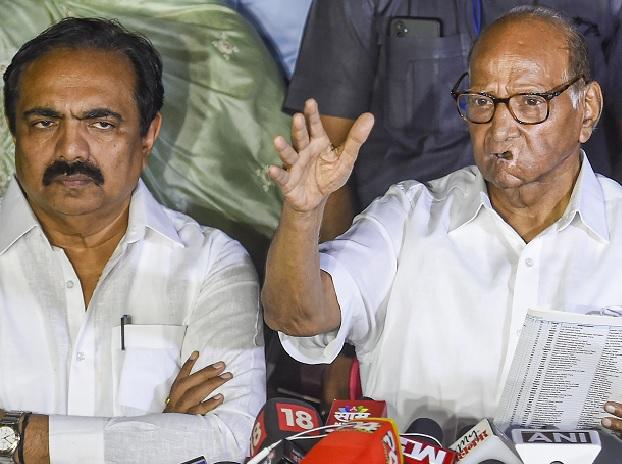 Mumbai (Maharashtra): Nationalist Congress Party supremo Sharad Pawar on Thursday said that the Maha Vikas Aghadi alliance of Shiv Sena, Congress and NCP will back Maharashtra Chief Minister Uddhav Thackeray who is facing rebellion from his own party MLAs led by Eknath Shinde, leading to uncertainty over the future of MVA government.

Addressing a press conference here, Pawar, who was credited for stitching the MVA alliance after the 2019 state Assembly elections, said that the current political situation will change once rebel Shiv Sena MLAs return to Mumbai. “MVA decided to back CM Uddhav Thackeray.

I believe once the (Shiv Sena) MLAs return to Mumbai the situation will change,” he said.

“Everyone knows how the rebel Shiv Sena MLAs were taken to Gujarat and then Assam. We don’t have to take the names of all those assisting them… Assam Government is helping them. I don’t need to take any names further,” the NCP chief Pawar said.

Pawar expressed confidence in overcoming this crisis and said the government under the leadership of Thackeray will run smoothly.

“We have seen such situations in Maharashtra several times. With my experience, I can say that we will defeat this crisis, and the government under the leadership of Uddhav Thackeray will run smoothly,” Pawar said.

In a jolt to the Maha Vikas Aghadi government in Maharashtra, senior Shiv Sena Minister Eknath Shinde with over 40 party MLAs revolted against his own party on Monday night and camped in Surat.

After camping in Surat for some time, they are currently staying in Assam. The number of rebel MLAs has now risen to 42.

Meanwhile, party MP Sanjay Raut on Thursday said the Sena is ready to quit the MVA government if the group of rebel legislators camping in Assam returns to Mumbai in 24 hours and discusses the issue with Chief Minister Uddhav Thackeray.

“You say you are real Shiv Sainiks and will not quit the party. We are ready to consider your demand provided you come back to Mumbai in 24 hours and discuss the issue with CM Uddhav Thackeray. Your demand will be considered positively. Don’t write letters on Twitter and WhatsApp,” Raut told reporters.

Meanwhile, Shiv Sena MLA Kailas Patil, who had escaped from a car carrying rebel legislators to Surat, claims some of those taken to the camp led by Maharashtra Minister Eknath Shinde might be wanting to return, but were forced to stay back.

Congress leader Mallikarjun Kharge on Thursday held the central government led by the BJP responsible for the ongoing political crisis in Maharashtra. Kharge alleged that the BJP-led Centre is attempting to “destabilise” the “strong” Maha Vikas Aghadi government in view of the forthcoming presidential poll next month as they need numbers to get their presidential candidate Droupadi Murmu victorious in the poll slated to be held on July 18.

Maharashtra Congress chief Nana Patole also accused the BJP of trying to split Shiv Sena. “We’re working on how to sort this out… Maha Vikas Aghadi government will continue and will complete 5 years. We are keeping an eye on the situation. Congress stands with MVA,” he said.