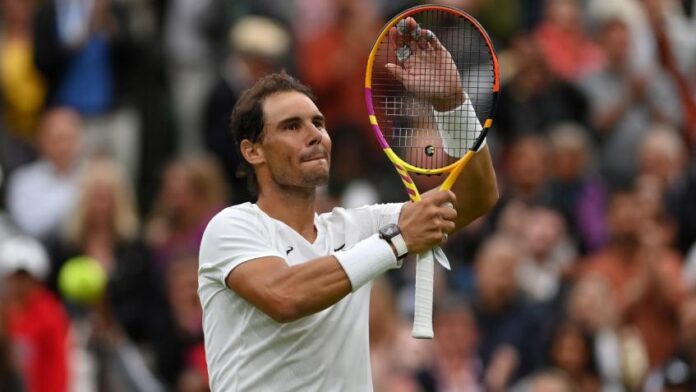 London [UK]: Two-time Wimbledon champion Rafael Nadal has pulled out from the competition due to an injury.

The No.2 seed was set to face Nick Kyrgios of Australia in the Men’s semi-final on Friday, but an abdominal tear led to him announcing his withdrawal from the event. With this, Kyrgios has advanced to the finals where he would take on either Serbia’s Novak Djokovic or the British player Cameron Norrie.

Earlier, Rafael Nadal produced another dramatic show on Wednesday at Wimbledon, where the Spaniard held off a high-powered performance from Taylor Fritz to reach the semi-finals in London.
The second seed showcased trademark strength, increasing his aggression to keep points short and delivering a high-class deciding-set tie-break to seal a 3-6, 7-5, 3-6, 7-5, 7-6(10-4) victory.
The 22-time major champion Nadal left the court for a medical timeout in the second set and seemed to be struggling with an abdominal problem midway through the pair’s four-hour, 20-minute quarter-final clash.
On the other hand, Nick Kyrgios reached his first Grand Slam semi-final on Wednesday, overcoming Cristian Garin in front of a harsh crowd on Court No. 1 at Wimbledon.
Kyrgios overpowered Garin 6-4, 6-3, 7-6(5) with his thunderous ball hitting, while he also showed great touch from all areas of the court to gain the most significant win of his season after two hours and 13 minutes.