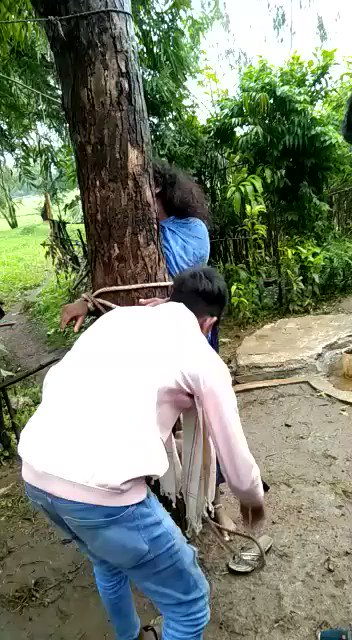 Banswara (Rajasthan): National Commission for Women on Saturday took cognizance of a video of a woman wherein she is seen tied to a tree and assaulted by a man while others were seen standing around her.

Six persons have been booked in connection with the matter that took place in Banswara in Rajasthan, police said. According to the police, those accused include her husband and in-laws.

“A video which showed a man beating a woman who was tied to a tree went viral last night. We traced the victim and registered a case. The accused were identified. Six people have been booked, of whom two are minors. Accused include the victim’s husband and in-laws,” said Superintendent of Police (SP) Banswara, Rajesh Meena.

The video was shared by Rajasthan BJP leader Laxmikant Bhardwaj in which he said that the incident took place in Rajasthan’s Banswara. Delhi BJP leader Tajinder Pal Singh Bagga, quoting his tweet, tagged NCW chairperson Rekha Sharma and asked her to take action on the matter.

In the video, a group of men is seen standing near the site where the woman was being tied to a tree and a man was hitting her with a stick.

The Commission, taking cognizance of the brutality of the incident, wrote to the Director General of Police of Rajasthan seeking to arrest the accused.

The NCW also asked the police to ensure medical treatment for the victim.

“@NCWIndia has taken cognizance of the brutality. Chairperson @sharmarekha has written to DGP @PoliceRajasthan to intervene in the matter and to register FIR. NCW has also sought immediate arrest of all the accused and to ensure best medical treatment and security for the victim,” NCW tweeted in response to Bagga’s tweet.