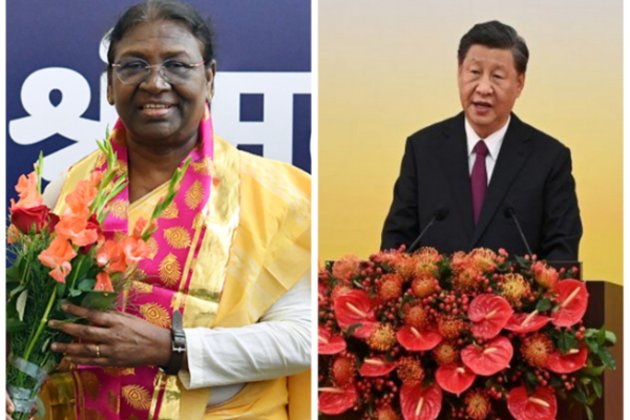 Beijing [China]: Chinese President Xi Jinping on Monday sent a congratulatory message to Droupadi Murmu on her assuming office as the president of India, saying that he attaches great importance to China-India ties and wishes to push the bilateral relations in the right direction.

In his message, Xi pointed out that China and India are important neighbours of each other, and that a healthy and stable China-India relationship is in line with the fundamental interests of the two countries and their people, as well as conducive to peace, stability and development in the region and across the world, Xinhua news agency reported.

Newly sworn-in Droupadi Murmu assumed the office of the President of India at the Rashtrapati Bhavan today. She assumed office in a handing-over ceremony from outgoing President Ram Nath Kovind.

President Murmu was today administered the oath of office by Chief Justice of India NV Ramanna.

In her address to the nation after being sworn in, Murmu stated that she was the first President to be born in independent India and was honoured to take charge at a time when the country is completing 75 years of Independence.

The first tribal and second woman to hold the country’s highest constitutional office said her elevation to the post is not only her own achievement but that of every poor of the country and is a reflection of the confidence of crores of Indians.

“Johar! Namaskar! I humbly greet all my fellow citizens from this sacred Parliament, a symbol of the hopes, aspirations and rights of all the citizens of India. Your affection, trust and support will be my greatest strength in discharging my functions and responsibilities,” she said.

“I express my heartfelt gratitude to all the MPs and all the members of the Legislative Assembly for being elected to the highest constitutional post of India. Your vote is an expression of the faith of crores of citizens of the country,” Murmu said.