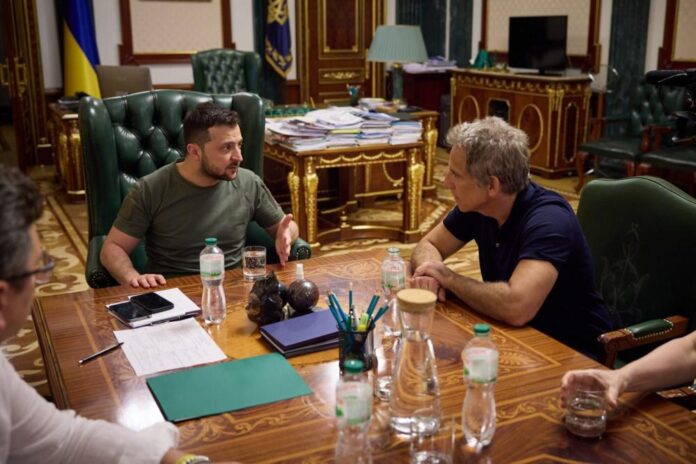 Ben Stiller and UNHCR Representative in Ukraine Karolina Lindholm Billing visited the Office of the President after a visit to the occupied settlements of the Kyiv region. On Monday, they visited, in particular, the ruined residential areas of Irpin, where they talked to people who survived the occupation. “It’s one thing to see this destruction on TV or on social networks. Another thing is to see it all with your own eyes. That’s a lot more shocking,” said Stiller.

“What you saw in Irpin is definitely dreadful. But it is even worse to just imagine what is happening in the settlements that are still under temporary occupation in the east,” Zelenskyy said in response.

The Ukraine President and the UNHCR Goodwill Ambassador discussed the needs of temporarily displaced persons in Ukraine, as well as those in Poland, which Ben Stiller visited the day before. Zelenskyy and the UNHCR delegation discussed ways of further cooperation of the Ukrainian authorities with UNHCR.

On World Refugee Day, Stiller called for compassion and support for all refugees around the world and those forced to flee.

During a visit to Poland and Ukraine this week, where Stiller is meeting those recently forced to flee their homes, the actor, director, and long-term Goodwill Ambassador for UNHCR, is calling for urgent global support and funding, not only for those affected by the Ukraine crisis, but for every one of the 100 million around the world who have been forced to flee.

In a statement to mark World Refugee Day today, Stiller said: “I’m here meeting people forced to flee their homes due to the war in Ukraine. People have shared stories about how the war has changed their lives – how they’ve lost everything and are deeply worried about their future.”

“Over the years I’ve had the chance to meet refugees and asylum seekers from around the world-from Syria, Central America, Afghanistan, Iraq, and now Ukraine,” he added.
Since Saturday 18 June, Stiller has been in Poland and Ukraine meeting with individuals and families who have been displaced due to the war.

According to UNHCR, the war in Ukraine is driving the fastest and one of the largest forced displacement crises since World War II. Families have been torn apart and the trauma of war will have a lasting impact on many of those forced to flee their homes, including women and children, who represent some 90 per cent of those forced to flee.